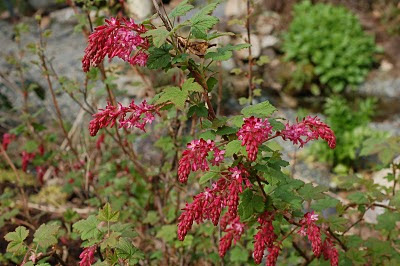 A few years ago our friend Helen Schwantje brought in a bouquet of a spectacular Red-flowering currant from a plant in her garden. I managed to strike a cutting from her plant and now have this form in our garden. It flowered in our garden for the first time this spring and confirmed my suspicions..this is a really good form of Red flowering Currant. I will do my best to take some more cutting this fall and hopefully get them into the nursery trade. Thank you Helen!!!

That of course begs the question do we need another form of Ribes sanguineum in the nursery trade..there are already over thirty cultivars that I have been able to find in catalogues or on websites. Here in Victoria the cultivar 'King Edward VII' is the one your most likely to find in a nursery. This cultivar is from a plant grown in Europe, even though the species is native to our west coast. Given the small gene pool available to old world growers its not terribly surprizing that there are plants that are as good or better than King Edward VII growing in the wild (or in Helen's backyard). 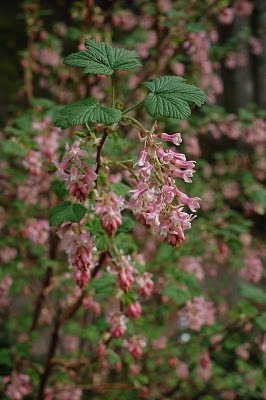 Over a decade ago we found a wonderful pink flowering form in Esquimalt, which we introduced into the nursery trade as "Blushing Victorian". It is very similar in colour to the more widely available "Appleblossom", but flowered a full ten days earlier in our garden this year.

1.'Albescens'= “Album’. White flowers.
about 6' tall, the branches arching attractively. The leaves are light green during the growing season, turning beautiful mixtures of yellow, orange and red in fall and early winter. White blossoms touched with pink are displayed on 3-6" slightly drooping stems. Plants that are forced or grown under poly or glass may be pure white.

5.'Barrie Coate'. A bushy selection from northern California, now alleged to belong to the type subspecies, rather than the variety glutinosum, . Deep pink blossoms in short, outfacing or only slightly nodding clusters.

8.“Carneaum grandiflorum’ White flowers tinted pink on the outside. Old variety that may be lost to cultivation.

10. 'Diamonds and Rubies' a new introduction from Thimble Farms.  White flowers with a good dash of ruby red at the boutber base of the flower bud and receptacle.

13.Ribes x gordonianum This cross between Ribes aureum and R. sanguineum produces a mid-sized shrub about 6 ft. tall and 8 ft. wide. Red flowers with yellow insides are produced in profusion in spring. There is no fruit set. Hybrid between odoratum and sanguineum. Scented. Flowers red outside, inside yellow. Discovered in Ipswich England in 1837. Flowers reddish yellow in racemes followed by edible black fruit.Incorrectly this is often cited as hybrid between Ribes odoratum or R.petraeum and Ribes sanguineum

17.‘Inverness White’ A white flowered form of R.s.glutinosum found by Roger Raiche on Inverness Ridge, Marin County, California. Fading flowers have a rosy cast, as the flowering season ages this gives the plant a bicoloured appearance.

18.'King Edward VII' Stout trunked and compact selection. Appears to be quite variable, and I suspect that there are now several clones in the nursery trade under this name. Crimson red.

22.‘Mesa Red’ “the flowers of this selection have more violet in their red”.

30.‘Spring Showers’ Introduction from Suncrest Nurseries. Their website describes it as “a bushy, roughly vase shaped shrub, about 6' tall in the parent plant. It has fuzzy, bright green leaves and light pink flowers, displayed in pendant clusters up to 8" long. Probably 0-5oF.” Flowers later than Elk River Red.

31. 'Splendens' Similar to Pulborough Scarlet and King Edward VII, originally found in a garden in Ireland.

32'Spring Snow'White flowers appear in pendulous 3 inch long racemes along the length of the stems then produce blackish blue fruits.

34. 'Thourmaline Bells' a new introduction from Thimble Farms with white flowers that have a touch of tourmaline red at the base of the flower bud receptacles.

38.var. glutinosum. The southern most of the two subspecies,

39. 'variegatum' or 'varigata' Leaves have of a misting of cream rather than bars and stripes. As the leaves age the cream mellows to a milky white.

Corydalis solida naturalised in a lawn 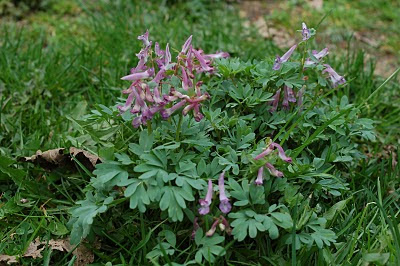 A few years ago we were travelling in Nova Scotia in early May and drove through the town of Wolfville. One of the most spectacular "lawns" I have ever seen was there, an enormous sheet of pinky purple, a colour I immediately guessed as the product of thousands of plants of Corydalis solida. It was the first time I had seen this species used this way and resolved to starting planting some of this Corydalis in our own lawn.

For a few years, Corydalis solida was available cheaply in the fall as prepacked tubers, and I purchase two packages to try them in our lawn. They are great bulbs to use for this purpose, they emerge very early and as soon as they finish flowering and setting seed they go dormant and dissappear entirely, usually long before I have any intention of mowing the lawn. In fact, my luck with these naturalized in the lawn is far better than my track record in growing them in the garden, where their early dormancy means I usually forget that they are they and dig them up inadvertently. 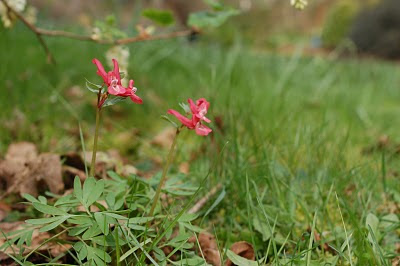 A few years ago I also planted some plants of a bright red flowering cultivar of Corydalis solida cv "George Baker" which has also done well with this treatment. The site I chose for these plants is a little leaner than for the others and I have to fertilize them once a year to keep them expanding, otherwise they get no care at all.

Other plants we have planted in the lawn include Scilla sibirica, Narcissus, Galanthus nivalis, Dodecatheon hendersonii, Frittalaria pudica, Muscari fragrans,
Posted by David F. Fraser at 9:17 PM No comments: