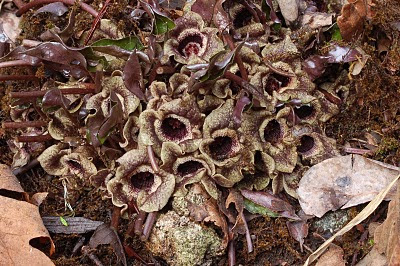 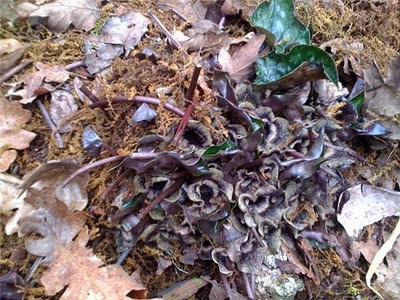 Blooms in February are always a bonus, but usually when we have them pop up in the garden its the product of deliberate planning...we've chosen a plant for its early bloom on purpose. So it was particuarly surprizing when I discovered a plant in bloom yesterday that I had no idea flowered so early in the season. And they are bizarre blooms at that.

While clearing away a weeds I disturbed some Garry Oak leaves that had fallen on our plant of Asarum splendens, a wild ginger species from China. I was surprized to see a flower, and then as I cleared away more leaves, I was even more surprized to see more than a dozen of them..We had no idea that this species bloomed so early in the season.

Now they aren't the type of blooms that your going to see from across the driveway, or even at a distance of a few meters, but up close the purpled mottled flowers are subtle and decidedly wierd.

Our plant of this species had been purchased orginally as Asarum magnificum however, now that it has bloomed I know that it was mislabelled and is indeed A. splendens. It is a great plant for the shade, with large shiney leaves mottled with silver. It looks to be a variable species with many different forms in cultivation, and despite the fact that it has been grown in western gardens for only a short time, several good forms have already been selected to be introduced to gardeners as named cultivars.

Despite its decidedly tender looks, ours sailed through the cold winter of 08/09 with little problem. Frosty nights turn the leaves an omnimous black but they resurrect themselves with every thaw. For the first three years in the garden the deer showed no interest in our specimen at all, but this fall they took off most of the leaves - which if they hadn't done I likely would have missed the early bloom entirely as the flowers peek out between the bases of the petioles and full foliage would have hidden them.

Our plant came from Brentwood Nurseries. Thimble Farms on Salt Spring carries the species as well.
Posted by David F. Fraser at 8:49 PM No comments: 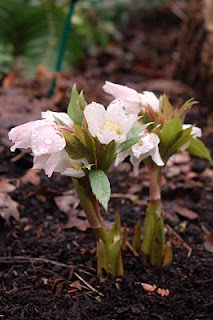 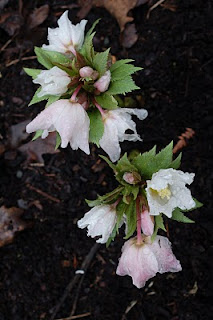 The genus Helleborus is made up of a group of species in Europe and Asia minor, with the majority of species found in the Meditteranean countries and the former Yugoslavia. The lone species found in China, Helleborus thibetanus (also known as H. chinensis) is seperated from the other species by a vast distance. While the species has been "known" to western botanists from herbarium speciemens that go back to the 1800's, it was not until the 1990's that live speciemens of this species became available. Kew Gardens obtained seed in 1991 and their first flowering was in January 1997, and in the mid-1990's a small number of plants were made available from China.

Both the flowers and the foliage is more delicate than the other hellebores,and the blooms in particular are reminiscent of Glaucidium . Flowers are variable most opening white and quickly aging to pink with red viening. Some open pink and others open green. I suspect that selection of better than average forms will quickly take place and further improve an already terrific plant.

In the limited area in central China were the species is found, grows in moist north facing slopes, with moisture loving species such as Ostrich Fern and Petasites. Indeed the species is not nearly as drought tolerant as the other Hellebores, we lost our first plant by planting it in a too dry a spot, despite the fact that a number of other Hellebore species are perfectly happy in that bed.

The plant starts growth very early, and if allowed to dry out at all over the growing season, goes dormant and dissapears entirely early in the season. Our second attempt at this species has proven to be more successful with the first blooms this year. The last few years I have been bulking the plant up with early applications of fertilzer and ensuring the plant is kept moist over the growing season - it seems to have paid off, for its first year in bloom two of the crowns have blossomed and it has 13 blooms to date.

Sources: Our plants came from Thimble Farms on Salt Spring Island,they have a spectacular collection of Hellebores for sale this year.
Posted by David F. Fraser at 3:35 PM No comments: