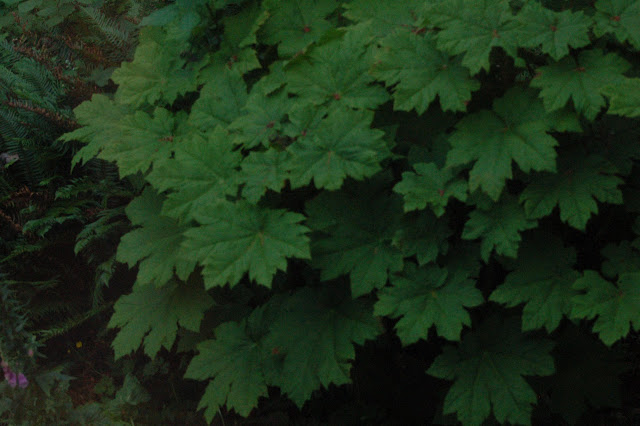 Devil's Club –for that Tropical Look and Feel

One of the most successful shrubs we have in the garden is a large, and now relatively old, specimen of Devil’s Club, Oplopanax horridus.  Our plant has lived in a pot for 21 years..or rather a succession of ever larger pots, and now sits on the cover to our water cistern. I can no longer lift it, so its in the biggest pot its going to get.   In front of it is a clump of exuberant Trillium kuryabashii which more or less disguises the pot for a good part of the early growing season.

The pot is connected to our drip irrigation system, which waters most of the garden, including our collection of Brugmansia.  Since Brugs and Devil’s Clubs both require a lot of water to flourish our Devil’s Club has grown to be an imposing specimen.

Most visitors to our garden are impressed with the plant until they realize what species it truly is, at which point they usually say “Wait a minute, is that a Devil’s Club?” and give you the same look as if you were trying to pass counterfeit currency, or sell them cedar kindling sticks as pieces of the cross.  Too many have had bad experiences hiking through patches of the dangerously armed shrub to have very many warm fuzzy feelings about the plant, despite its beautiful large leaves and tropical look.

I was pleased to read Dan Hinkley’s description of the species as “among the most sensational plants in our natural landscape” – and then dismayed to  read his dismissal from horticulture as “it simply refuses to survive the transition to a garden setting” – mental note, don’t let my plant near Hinkley’s book on Shrubs and Vines.

To be fair, the species for whatever reason, seems to fair better in  the garden confined to a large container than in the ground, and I really don’t have a good explanation for why that is so.  Ours is on the same cultivation regime for water and fertilizer as our collection of Brugmansias, which means lots of both.
It will survive periods of droughts, but then it looks entirely ratty with dead-edged leaves and dessicated blossom spikes.  I suspect the secret to our success is drip irrigation and an automatic water timer.
Both these things are well worth the effort for this plant, with it huge leaves and bright red berries the colour of sealing wax.  Our plant is now so large that I have had to chain it down to the lid of the cistern on four sides so that it doesn’t  fall over in windstorms.  Before we did this, lifting it back up was quite an effort.
The species is easily propagated by dormant hardwood cuttings  about a foot long, direct stuck into pots of soil in the autumn and left outside.  Its so easily rooted, I’ve never tried growing it from seed.

Armed with wicked spines on the twigs and the leaves, its never been the target of deer browse.  Slugs occasionally climb the spiny stems and chew a few holes in the leaves but never damage the plant to any great extent.
Posted by David F. Fraser at 9:40 PM No comments: 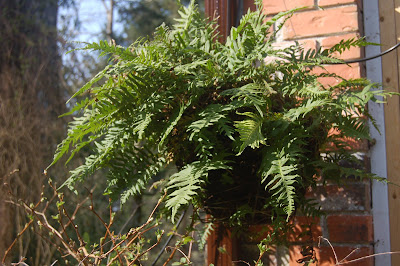 In the winter months, we replace our summer hanging baskets with baskets of licorice fern (Polypodium glycerrhiza). They look great for the entire winter and aside from the odd handful of slow release fertilizer,they require almost no care during the winter months. Here in Victoria, there is usually enough rain that extra watering isn’t necessary from October thru April. In the spring, usually in April, they will go dormant and drop their leaves if they dry out, however since we usually start the irrigation system which also runs the drip lines for the hanging baskets in mid-April, they last the few weeks longer until the annuals are ready for the summer moss baskets. In May we stop watering them and store them in the shade somewhere where they go completely dormant. A good rain, or heavy watering in August, will start them into active growth again so they are full and lush to put up when the annual baskets come down in October or November.

It occurred to me as I was working on the sprinkler system this spring that these particular hanging baskets were planted 19 years ago. This summer I will divide them and replant them and they should last another 20 years.