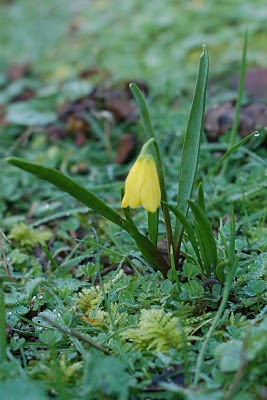 Last week Fritillaria pudica popped up in the lawn, the result of some bulbs we had planted there two years ago. I had assumed that we had lost the bulbs due to winter wet, as this is a species of the dry southern interior and they didn't show themselves at all last spring. To be honest, I had completely forgotten that they had even been planted. I should have known better, I have had this experience with another species of Frittilaria before, where the bulb apparently did not come out of dormancy the first spring after I planted it. As I photographed it I thought about how I had found the package of Fritillaria pudica bulbsin an unexpected place....a department store. The addition of what to appears to be a yellow snowdrop in the lawn was a nice surprise. Wish I had planted more....

There are a few native plants that are so well established in gardens that you expect to find them in any nursery, Ribes sanguineum, Mahonia aquifolium,and Achillea millefolium among others. I did not however, expect to find this little native bulb at such a retailer, maybe its become more mainstream than I thought.

I have a couple of other plants I prize highly in the garden that came from large stores not usually noted for unusual plants. My plant of Sanguisorba menziesii was purchased, in bloom, as a one gallon pot in a grocery store. This red flowering species of burnet is on the Blue List for British Columbia, but also grows in Asia.

Our orignial plant of Phytolacca clavigera came from a tiny roadside nursery that has since gone out of business...it was in a half gallon, stunted and cholorotic, but somehow you could see that it might be something good..so far it is the best Phytolacca that I have seen and one of my favourite plants in the garden Despite stopping many times at the same nursery I never did see another unusual plant offered.

Deer: Fritillarias are usually not touched by deer, although I haven't had this species in the garden long enough to have personal experience with it. Phytolacca clavigera has never been eaten by deer and falls into the "deer proof" category. Sanguisorba menziesii does get eaten from time to time, but never enough to seriously damage the plant (as of yet anyway).

Sources: Fritillaria pudica bulbs were purchased from Sears. Phytolacca clavigera was purchased from a nursery that is no longer operating, however seeds can be obtained from the gift shop at the UBC Botanic Garden and Thimble Farms on Salt Spring Island offers plants. Sanguisorba menziesii was purchased at a Safeway in Victoria.
Posted by David F. Fraser at 9:12 PM No comments: