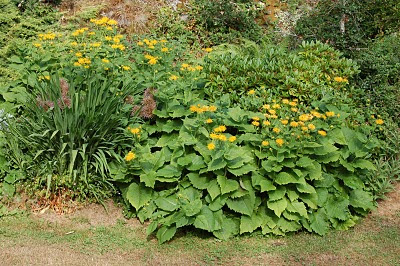 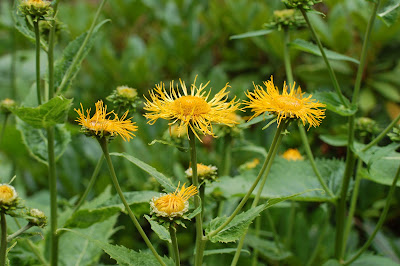 Telekia speciosa is a 2 m tall yellow daisy with huge leaves and late June/ early July flowers that are reminescent of yellow spider chrysanthemums. I orginally bought a single plant in a two gallon pot that was labelled Tellikia grandiflora which turns out to be a non-existant species.

The huge hosta-like leaves are what attracted me to this plant in the first place, and it is a great plant for providing a touch of the exotic to the garden. Its native to southern Europe, the Ukraine, the Balkans, the Caucusus and Turkey. The big leaves effectively shade out weeds completely. It has two aspects that are detrimental however, one is that when its finished blooming, it looks worn, ratty and rapidly becomes a ornamental liablility. The second is that it produces a sunflower-like seeds that germinate readily, which means the species has the potential of turning into a garden thug. Our single plant rapidly turned into a large clump that looked terrific from late April to July,and a pile of burned-edged ratty vegetation from August to October.

Both the rattiness and the over production of seedlings are solved by the same managment regime, as soon as the plants have finished blooming we cut them to the ground, fertilize and water - and the race begins.

The new Telekia growth that comes up within a week or ten days are large, lush, unblemished leaves that will last through until the first hard frost...in order to provide colour for this piece of garden we have some large pots of plants in waiting to plunk into place the day we cut the Telekia back. Canna lilies, Nicotiana sylvestris, Echinacheas, Castor Plants or other large robust plants that if planted large will compete with the Telekia's exuburiant growth are successful choices, more demure annuals are swamped by the startlingly vigourous leaves.


If you do miss cutting back the plants and let them go to seed, they are attractive to seed eating birds such as siskins, goldfinches, purple and house finches. Small seedlings are easy to weed out, more established plants take a sharp spade, some sweat and a few cuss words. The flowers are good for flower arranging, but you do have to remove some of the big leaves, or the cut stems can't keep up with the demand for water. The shaggy flowers also look great floating in bowls of water.Telekia has never been tasted by deer in our yard, the foliage is quite strong smelling and I suspect unpalatable.
Posted by David F. Fraser at 8:46 AM 3 comments: