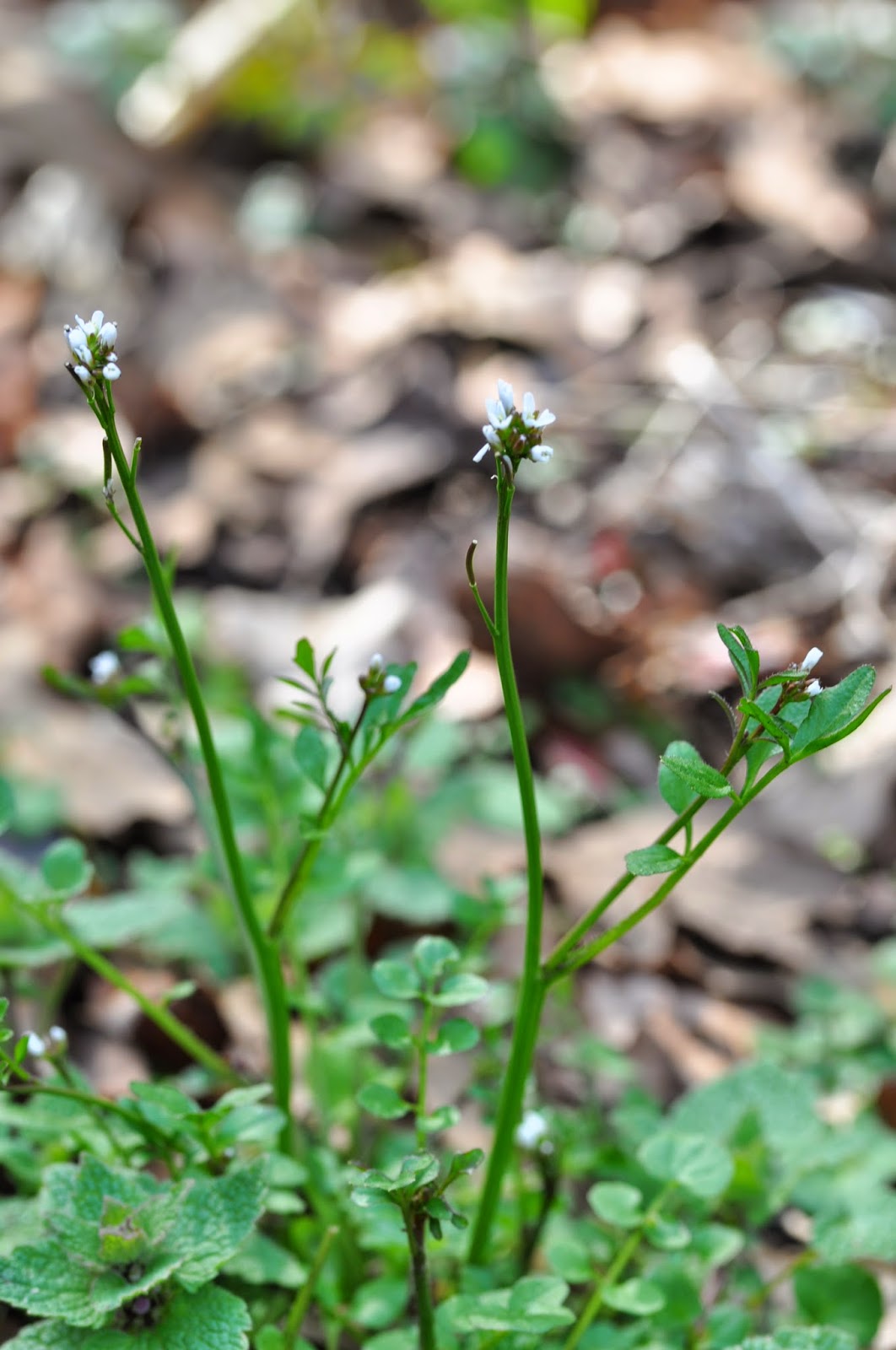 Hairy Bittercress (Carmdamine hirsuta) is a plant in the cabbage family  known by a variety of common names,some derive from its ediblity (Hairy Bittercress, Pepperweed) and some from its seed dispersal mechanism (Shotweed, Snapweed, Popweed).  This is one of the most problematic weeds in our garden here at Leaning Oaks.  It is a winter annual, germinating in the late summer or fall once the cooler nights have set in and the soil starts to get moist.  It live throughout the winter as a basal rosette. It flowers very early in the spring and develops seed quickly.  Any check to its growth, such as a period of drought, or pulling the plant out of the ground,  leads to the formation of seeds in a few days.  The seed pods, once dry, open with a twist,  flinging the seed up to a meter from the plant.  Often the pods can be triggered to open by touching the plant.  At its worst, the plant can cover the ground so completely that it smothers other plants.  Any plant left to go to seed produces enough seeds to keep you busy weeding for days the next winter.


1. Eat it - this is a peppery edible that is a good addition to salads.

2. Let the Birds Weed it Out.  -in the winter sprinkling bird seed over parts of the garden that are invested with the seedling rosettes will encourage birds to scratch the seedlings out.  This is surprizinlgy effective if you have soil scratching species of birds such as Fox Sparrows, Spotted Towhees or Golden-crowned Sparrows in the yard.

3. Vinegar -the basal rosettes are easily killed by spraying pickling or cleaning strength vinegar. This is most effective before the plants have flowered.  Since vinegar is not registered for this use here, but vinegar for salads are ok, see 1.

4. Hoeing - this species isn't deep rooted and hoeing out the plants is relatively easy.  The problem is that even plants dislodged from the soil can set seeds quickly, so you must rake up and destroy any plants you hoe out.  Leaving them on the soil surface to die will result in a big seed bank. Even plant thrown on the compost pile will go to seed.  One trick is to cut off the flower heads before you hoe them out, then you can safely compost them, or let the plants dry out on the surface.

5. Mulching - this works but you must use sufficient mulch to prevent them from poking through - at least 4".  I don't trust this plant though, I would still cut off any flowering heads before I applied the mulch.
Posted by David F. Fraser at 9:37 PM